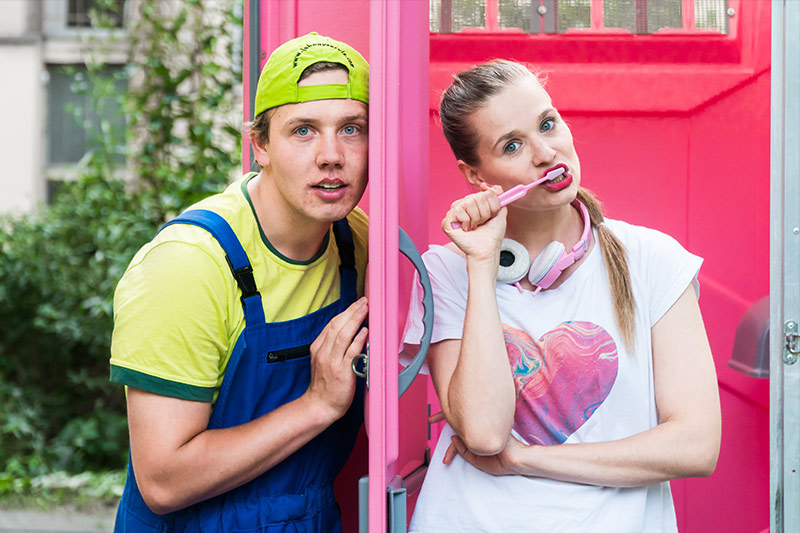 A Colorful Portable Toilet Romance.
A JOHHNY SERVIS portable toilet company technician is doing the daily routine when he runs into a stubborn and somewhat mischievous girl who turns his ordinary workday into an extraordinary adventure.
Original manipulation tricks, precise dynamic action and a bit of magic on top of it – that’s Johnny & Jenny, a grotesque comics-style battle to rule of the toilets for the whole family.

Length 45 min Who is it suitable for? For all audience

Jonatan and Michaela are schoolmates from the Department of Nonverbal Theater at Academy of Performing Arts in Prague. They graduated in 2020. During their studies, they met on several creative projects. Street show JOHNNY & JENNY is their first project together. They are currently based in Prague (Czech Republic) where they work as actors.
Michaela Stará is a dancer and performer, focused mostly on movement and physical theatre. She likes to combine styles, genres and techniques. One of them is a combination of pingpong juggling with dance style Vogue and Tutting. Jonatan is a clown and performer interested in improvisation. He also does circus technique cyr wheel.
Those two together are a unique duo which makes creative and surprising shows.

“…The pink cubicle is a woman’s house. A comical battle between the two protagonists ensues. The woman won’t give up her pink cubicle but the technician has a job to do and the cubicle has to be trucked elsewhere. They’re playing cat and mouse – or Tom and Jerry, to be precise – setting up traps for each other and fighting for their territory like lions. It’s a comical spectacle…” – Dance News

“Johnny & Jenny is a family romantic slapstic comedy by performers Jonatán Vnouček and Michaela Stará which tells the misadventures of a portable-toilet technician whose path is suddenly crossed – or whose cubicle is suddenly occupied – by a lady with a sense of humor.” – Dance News